Bomb Blast Film for Windows: What You Need to Know to Protect Your Building 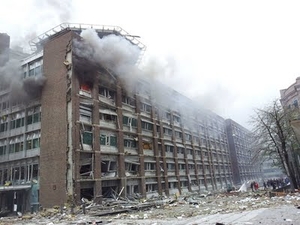 The devastation from the recent bomb blast in Oslo, Norway. Photo credit: nodeju.com.

In a world of growing violence and unrest, many businesses and government entities may find that their buildings are not able to withstand the impact of a bomb or ballistic attack.

According to the Federal Emergency Management Administration (FEMA), glass is often the weakest part of a building and breaks at much lower pressures when compared to floors, walls or columns. When explosions are external, glass breakage fragments and damage can affect areas miles from the blast site. In addition to the safety hazards of broken glass, the debris can cause blast cleanup delays and complications.

One way that governments, businesses and organizations are fortifying buildings against bomb and ballistic attacks is by treating windows with bomb blast film–a process that applies a coating that prevents windows from imploding when hit by the shockwave from a bomb blast. The advantages of windows coated in this bomb film are obvious–fortification against the dangers of imploding glass, maintaing the structure of the building and general building security.

However, there are several disadvantages to blast film. This film only protects buildings against small blasts and when impacted by the shockwave comes out as one large projectile, which can still pose significant danger. In addition, the blast film provides no thermal resistance or insulating properties and only dims the bright light of the sun. Finally, bomb blast film only has a lifespan of about 10 years, so it requires regular replacement.

The Thermolite Window System incorporates the safety features of bomb film but also provides a significant energy savings ROI component, making the building more secure and energy efficient. Contact us for more information on fortifying your existing windows against the threat of bomb blast, ballistics and hurricane winds as well as sealing the building envelope and saving money on energy costs.