The Jacob K. Javits Federal Office Building, located at 26 Federal Plaza in New York City, is the tallest federal building in the U.S. The plaza itself is comprised of a 45-story office building constructed in 1963-69 and an additional 45-story annex that was built in 1975-77. Both buildings are connected to the Watson Court of International Trade via a 4-story pedestrian bridge. 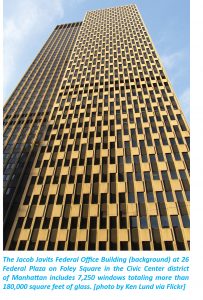 Like most buildings constructed in the 1960s and 1970s, the Jacob K. Javits Federal Office Building features
conventional non thermally-broken windows. These are center-pivot clear aluminum-framed windows with
a single pane of untreated glass. Although the most commonly used window at the time, this type of window system offers poor insulation, resulting in substantial energy loss, and in turn, higher utility costs. With more than 7,250 single-pane conventional windows (totaling 180,000 square feet of glass), the facilities staff at the Jacob K. Javits Federal Office Building wanted a cost-effective way to reduce its energy expense, which averaged $10 million per year.

After a review of the current windows installed at the Jacob K. Javits Federal Office Building, including a complete evaluation of the amount of energy escaping through them, Thermolite recommended the installation of its RetroWAL Gold fixed interior window system. Unlike traditional replacement windows, Thermolite’s RetroWAL system is installed on the interior of the building’s current windows, omitting: 1) the high labor cost of replacing the exterior windows, 2) the outdoor liability of multi-story scaffolding and high-rise labor, and 3)the cost of office downtime due to a longer and more intrusive installation process

Thermolite’s RetroWAL window system creates an air gap that mitigates heat loss by essentially trapping it between the glass panes. Thermolite installed double-pane, coated glass to provide additional layers of insulation. Because the installation of the RetroWAL system requires no removal of the original window glass and can be performed quickly, Thermolite was able to upgrade the complex’s window system from singlepane to triple-pane glass at a fraction of the cost of a traditional window replacement system.

Thermolite’s RetroWAL system addressed not only the energy inefficiency of the window glass, but also that of its frames. The original windows at the Jacob K. Javits Federal Office Building included outside and inside aluminum frames mounted directly onto each other, creating a powerful thermal bridge. Non thermally-broken windows like these create an easy pathway for heat transfer and result in a significant overall reduction in thermal insulation. Thermolite’s RetroWAL system included a barrier between the window frames, breaking the existing thermal bridge to block the natural flow of heat in the building, especially during colder months. 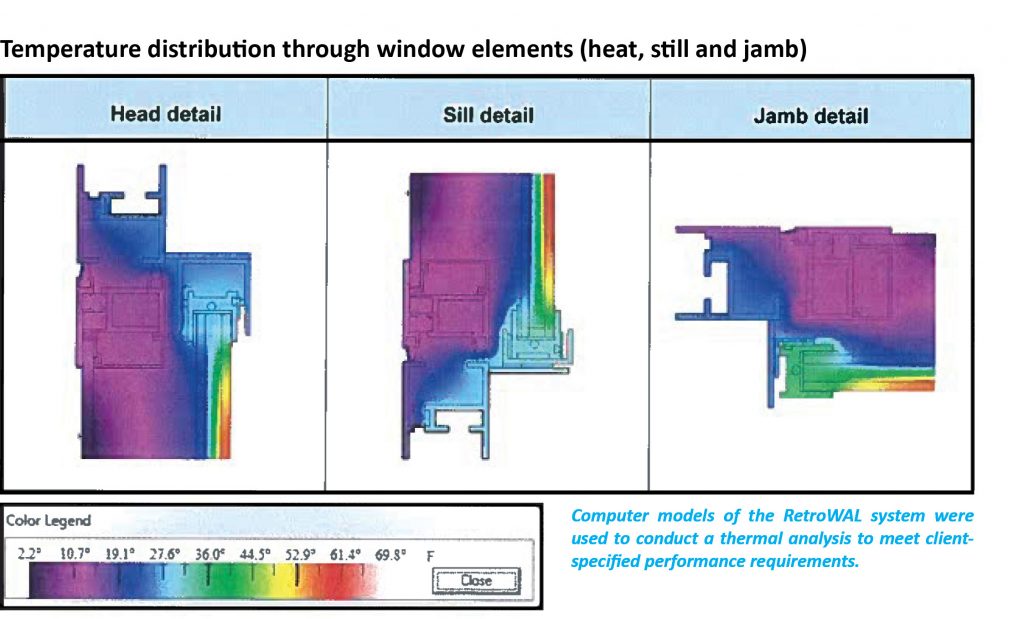 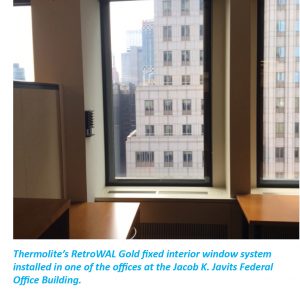 In addition to upgrading the federal plaza to triple-pane glass and eliminating the costly thermal bridge, the Thermolite RetroWAL window system utilized argon-filled low emissivity glass to further seal the building envelope for maximum insulation. Low emissivity glass, often abbreviated as Low E, is type of glass that increases the energy efficiency of windows by reducing the transfer of heat. Low E glass differs from normal, clear glass in that one side of the glass has a special metal coating designed to minimize the amount of infrared energy that can pass through the glass without compromising the amount of transmitted visible light. Low E coatings play an important role in the overall performance of a window and can significantly affect the overall heating, lighting and cooling costs of a building.

Thermolite installed soft coat low E glass at the Jacob K. Javits Federal Office Building. This type of glass has been treated with multiple layers of transparent silver and metal oxide in a vacuum chamber, a process that provides the highest level of energy efficiency performance and a nearly invisible coating.

Much of the success of the Thermolite interior window system installed at the federal plaza is due to the increase
in resistance of heat transfer (R value) and the decrease in the rate of heat transfer (U value) via the building’s new window envelope. The higher the R value of a window (which is the inverse of the U value), the more it prevents heat from escaping.

Initial testing concluded that the original single-pane windows at the Jacob K. Javits Federal Office Building had an R value of less than 1 and a U value of 1.4. After the installation of Thermolite’s RetroWAL system, the federal plaza’s windows increased to an R value of 2.94 and a U value of .33, nearly tripling the amount of window insulation and energy savings.