Thermolite’s RetroWAL™ interior curtain wall retrofit system disproves the myth that solar film is the only affordable solution for temperature control – it has been found to improve energy performance in an already retro-commissioned building.

Thermolite’s RetroWAL™ interior curtain wall retrofit system has been found to increase annual energy savings by an average of 16% in a retro-commissioned building.

Thermolite installed supplemental windows onto the west-facing offices on the 20th floor of the office building in Chicago, Illinois, which had already undergone a retro-commissioning exercise that addressed heating, lighting, and building envelope improvements. 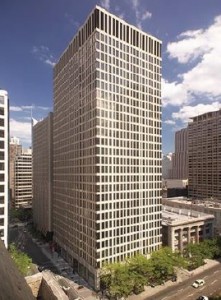 The following windows were monitored for three weeks to measure their energy performance:

A 2014 case study of the building showed immediately apparent temperature control improvements after Thermolite’s three interior window retrofit systems retrofits were added, even though the Chicago building was already retrofitted for superior energy efficiency compared to its counterparts.

Temperature fluctuation was reduced to approximate set points of 68°F and 76°F (10°F difference) compared to the previous range of between 63°F and 92°F (29°F difference). The installation of supplemental windows in the building affects the heat transfer processes through the building’s envelope and their contribution to heat gains and losses in perimeter thermal zones.

“Regarding temperature…there was a noticeable improvement on the average to above average summer days,” according to an occupant of the office building.

Other key findings from the case study include:

RetroWAL™ is the first Do It Yourself commercial curtain wall retrofit system that can easily be installed by a building’s maintenance staff within 10 minutes and without requiring structural reinforcement. Priced at less than $20 per square foot, RetroWAL™ shows it is better performing, yet just as quick and cost effective as solar film. View the 625 North Michigan Avenue Tower case study in its entirety.

About Thermolite
Thermolite has been providing energy and security window solutions to local and federal government agencies for over 30 years. Its advanced products and services reduce energy usage and improve security in the commercial building environment. Thermolite is the leader in blast mitigation, energy reduction, and hurricane interior window retrofit system technology. The factory is located in South Bend, Indiana.