The sun is our most dependable source of energy! Scientists predict its energy output will remain fairly consistent for the next 50,000 years. Harnessing the sun’s energy through solar photovoltaic (PV) systems simply makes sense and has many benefits.

Solar photovoltaic (PV) systems, are also known as solar panel, solar energy or solar power systems that convert sunlight into electricity. You can use this electricity to power your home, business or any other building. 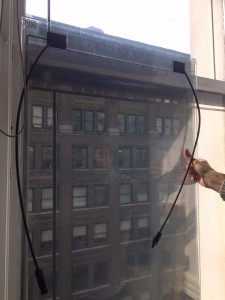 Solar windows have the greatest benefit when you need it most.  They block most the hot rays for the sun from heating the interior AND (at the same time) they generate electricity which will offset your air conditioning costs.

Solar windows are used most effectively in curtainwall retrofits on the South and East/West sides of the building. Windows are strung together in series, and connected to the nearest electrical panel on the floor.

Your window project is even more attainable by utilizing the solar Investment Tax Credit (ITC). This is a 30 percent federal tax credit for solar systems on both residential and commercial properties and is one of the most important federal policy mechanisms to support the deployment of solar energy in the United States. A tax credit is a dollar-for-dollar reduction in the income taxes that a person or company claiming the credit would otherwise pay the federal government. The ITC is based on the amount of investment in solar property. Thus, both the commercial and residential ITC are credits equal to 30 percent of the basis that is invested in eligible property that is placed in service before December 31, 2016. The success of the ITC shows that a stable, long-term incentive can reduce prices and create jobs in solar energy.